The Rest Is Yet To Come Process

You’ve probably seen by now if you are reading this that I did an animated video for Jim Guthrie’s song The Rest Is Yet To Come. This project had a pretty tight turning circle. Jim asked me on the 16th February and I had it finished on the 6th March. I’m not trying to show off (I am a bit) but this was in addition to a full time job, a 35 mile daily commute, two young children, a long suffering wife and a visit to our nation’s capital to draw comics at the design museum.

Jim had an idea for the video that I ran with and pitched him his idea the way that I’d do it. We were keen to try and keep it as simple as possible and to work in phases - getting to something that would function as a music video fairly quickly, then to continue adding to it until the deadline. That way, if something went horribly wrong, we’d at least have something that looked like a music video. I wouldn’t recommend this approach for every project, this was entirely reliant on the simple idea I pitched Jim at the start.

The basic idea was to have a scrolling cityscape with elements from the lyrics picked out. It would be done in two colours and would be hand drawn. Most artistic decisions I made at this point were based on speed and knowing what I could achieve in what time. I’m pretty confident in my ability to work quickly only once I know what I’ve got to do. I don’t have the same confidence if I’m flapping about in the dark, so my first task was to build this idea into something a little more well defined.

I knew I wanted a scrolling cityscape, but I wasn’t sure how to make the layout work with the timing of the song. Rather than sit with a notepad and jot down the times that each new line of the song would appear on screen, I made a long Photoshop file, added a grid and a big rainbow strip at the bottom for reference. It was kind of nuts, but helped me figure out my layout for the sake of timings. It looked like this; 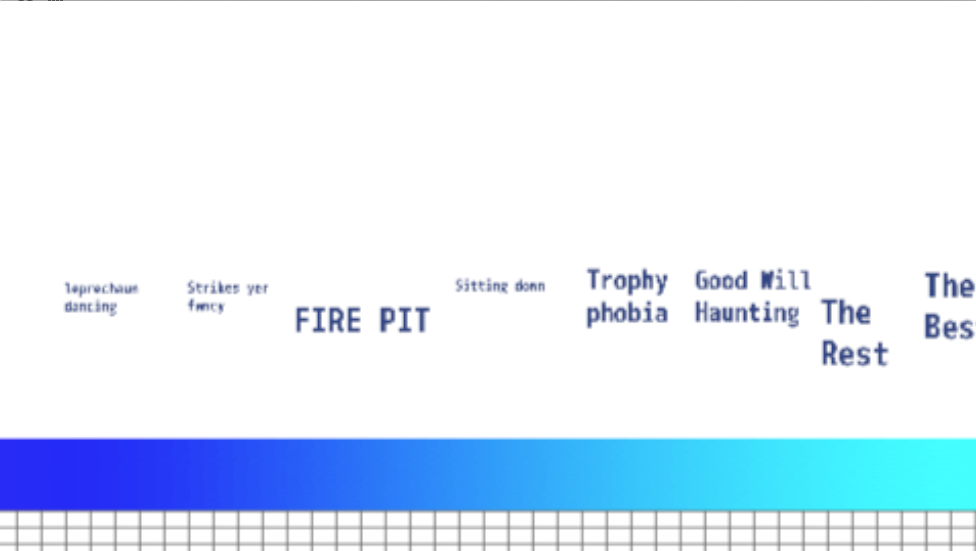 Not particularly flashy, but it really helped me figure out where I was going to have to draw everything and at what scale.

I broke down this long image onto 4 A4 sheets and printed out draft-quality versions of each. I did a few versions of each before settling on some nice rough roughs that looked like this;

I think I’ve written or talked about how I approach my roughs. As you can see, I do them very rough. If I do them much tighter, I ruin it when I come to do the line work. I used these roughs to lightbox onto the watercolour paper I’ve been using for for most things with the pens and watercolours I’ve been using for most things too. I really wanted to remove any chance of getting caught up in a new process or untried materials. I needed this to move quickly so I didn’t change too much from my normal process. At pretty much every stage I’d talk to Jim about how and where it was going. Jim made some really good suggestions that didn’t occur to me. Jim is a very easy guy to work with, very laid back but completely engaged,

I lightboxed the main buildings, embellishing each drawing as I did it. Then I moved the rough down the page and drew the elements that’d be in the foreground further down the page. This meant I only had to scan in one sheet and save some time there. 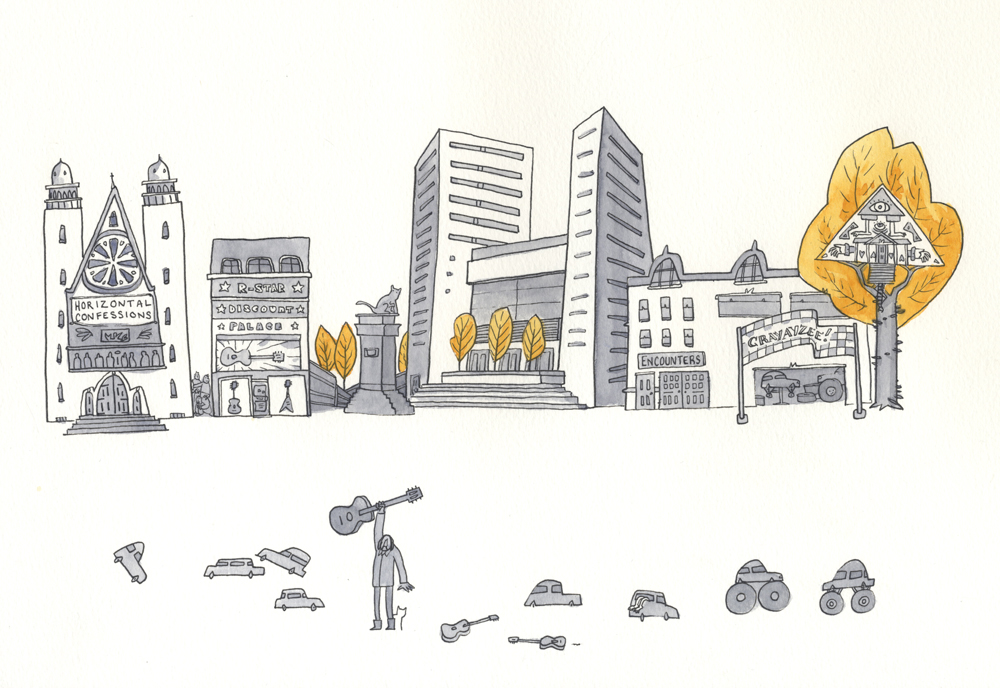 If you look closely, you can see the watercolour paper texture has scanned in as well. I’m not so worried about the texture itself, I quite like that, but I don’t like the way that it reproduces. As with my print stuff, I spend a lot of time getting rid of any unwanted textures. Here’s how I do it;

Here’s the scan in Photoshop in all it’s 600dpi glory. 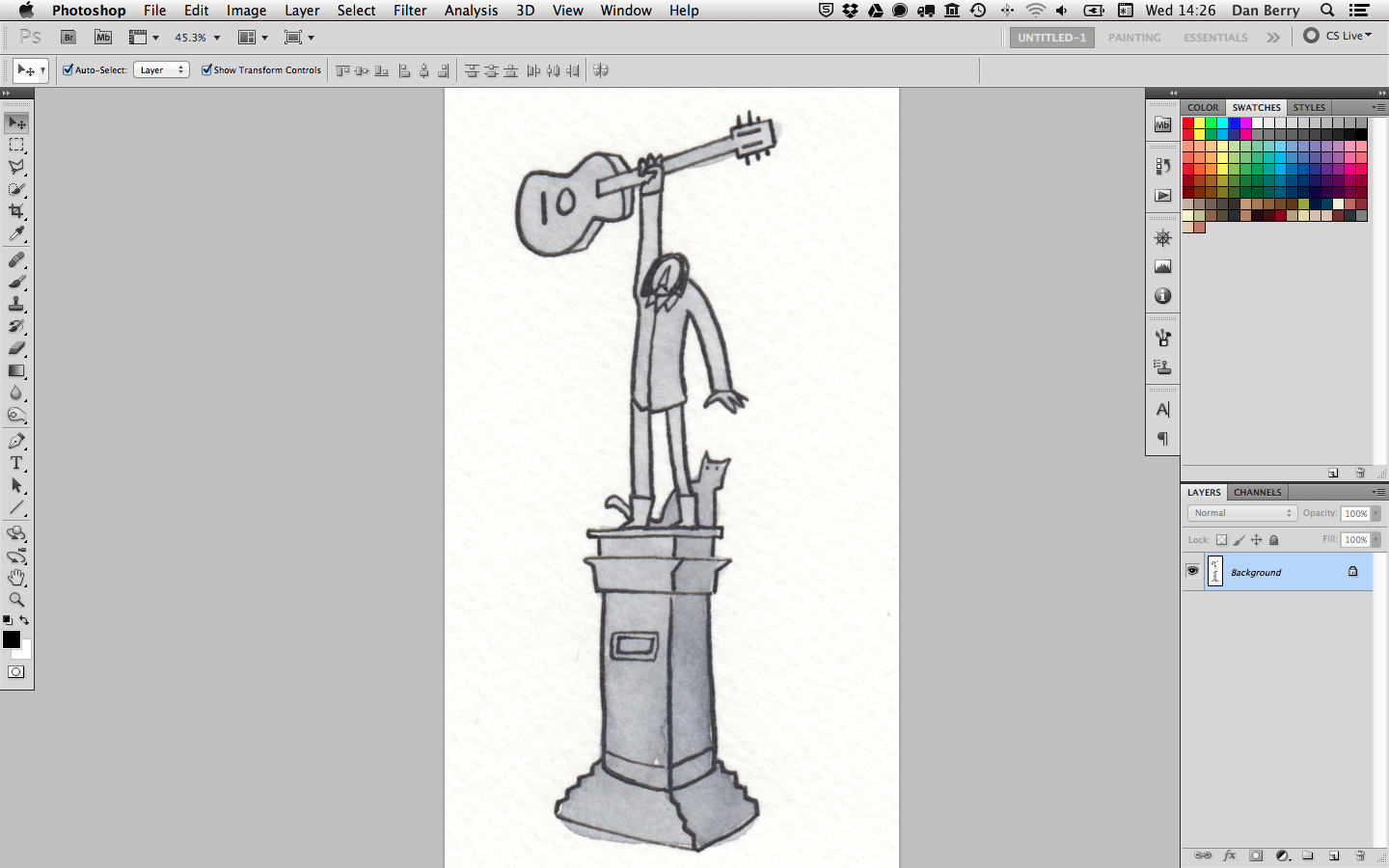 In this one I’ve exaggerated the levels to show you what I’m trying to get rid of - see all that grubby texture? I want to get rid of that. Remember that there’s a hundred different ways to do anything in Photoshop. This is not necessarily the best way to do this, but it’s the way I’m most comfortable and familiar and therefore quick. 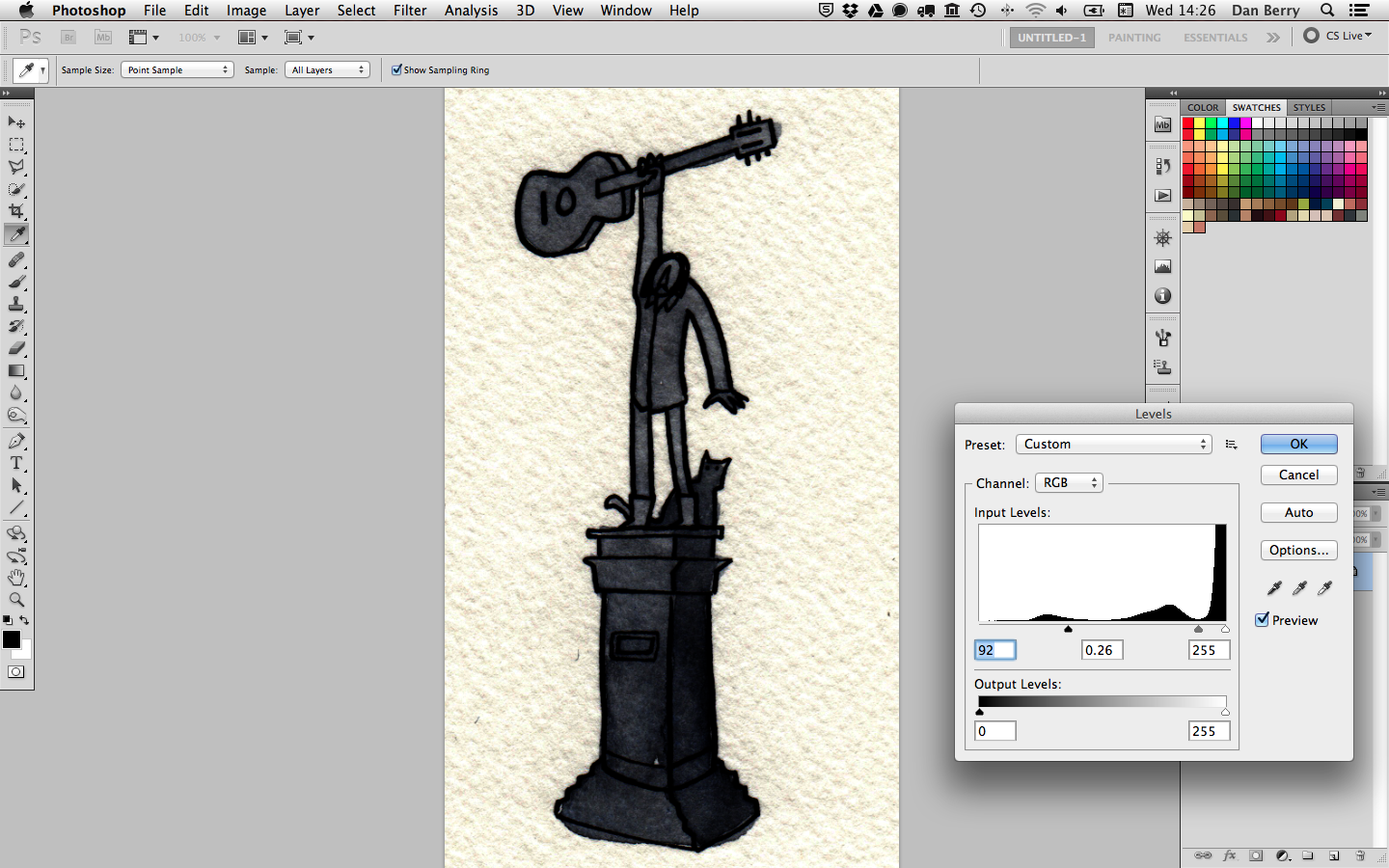 I use the Quick Selection tool to select the shape of the drawing. It’s not a smart tool, but if you’ve got definite lines like I do here, it can work out ok. 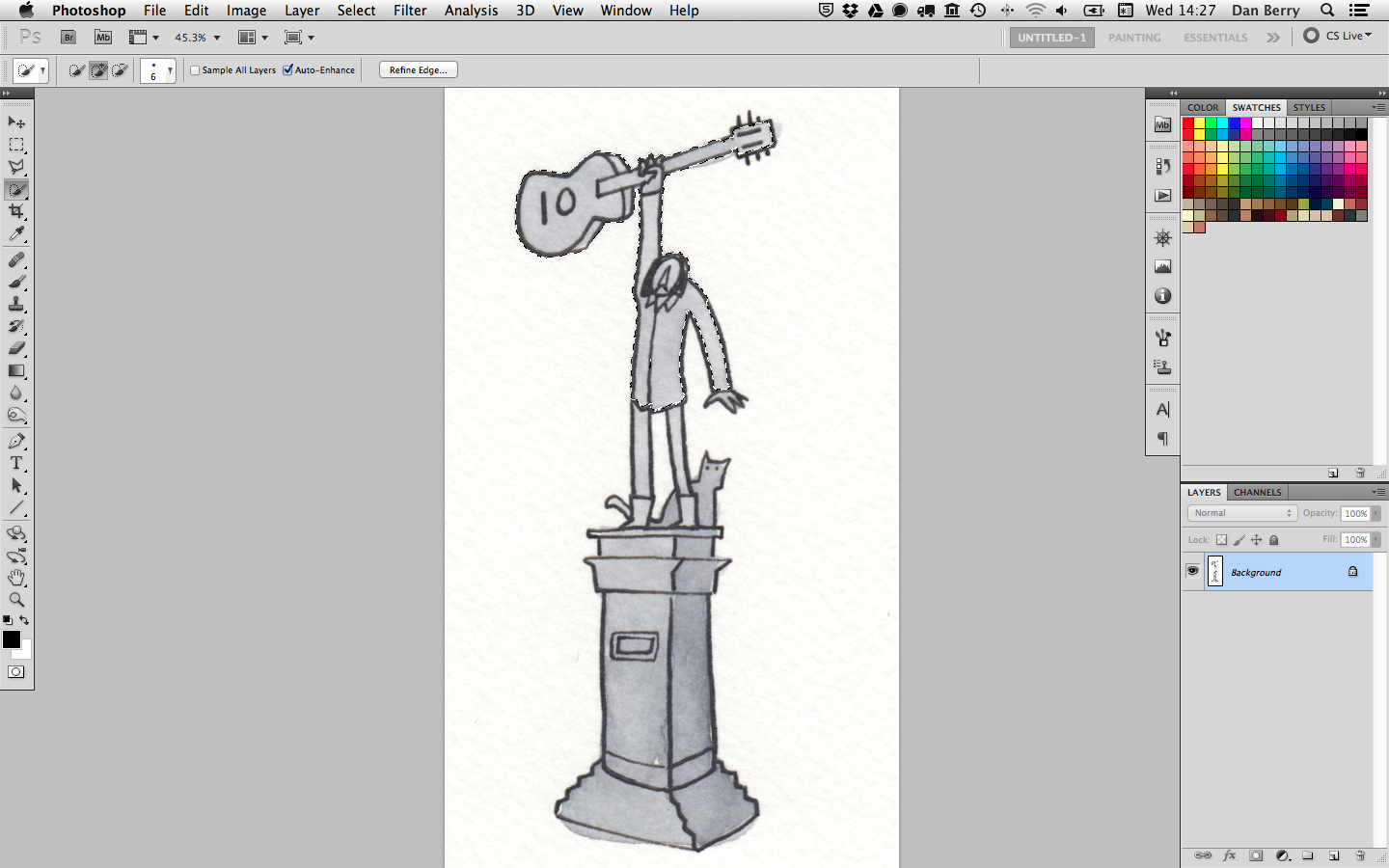 I sometimes select the white space around the drawing if it’s a complicated one and then select the inverse. It depends on the drawing. I do this with panels in my comic work too. I click on the refine edge tool and tinker with it in different views until I’m happy with it. I had to shift the edge in on this one as I didn’t want any white pixels around any of the sprites in this. I thought it’s ruin it a bit. 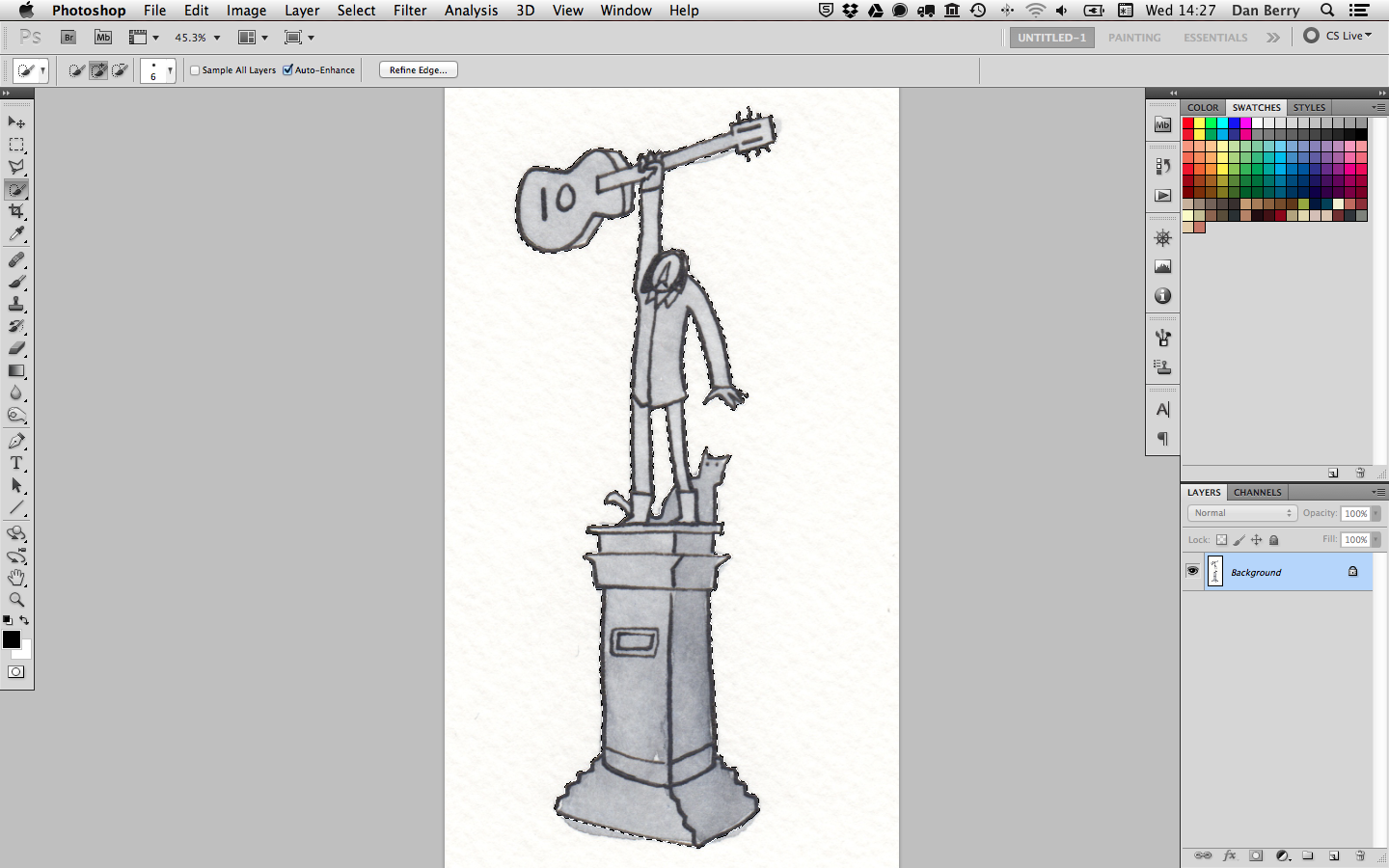 I make sure that it outputs to a new layer and that it saves the settings so I can do it over and over again without much tinkering. Here’s the difference it makes; 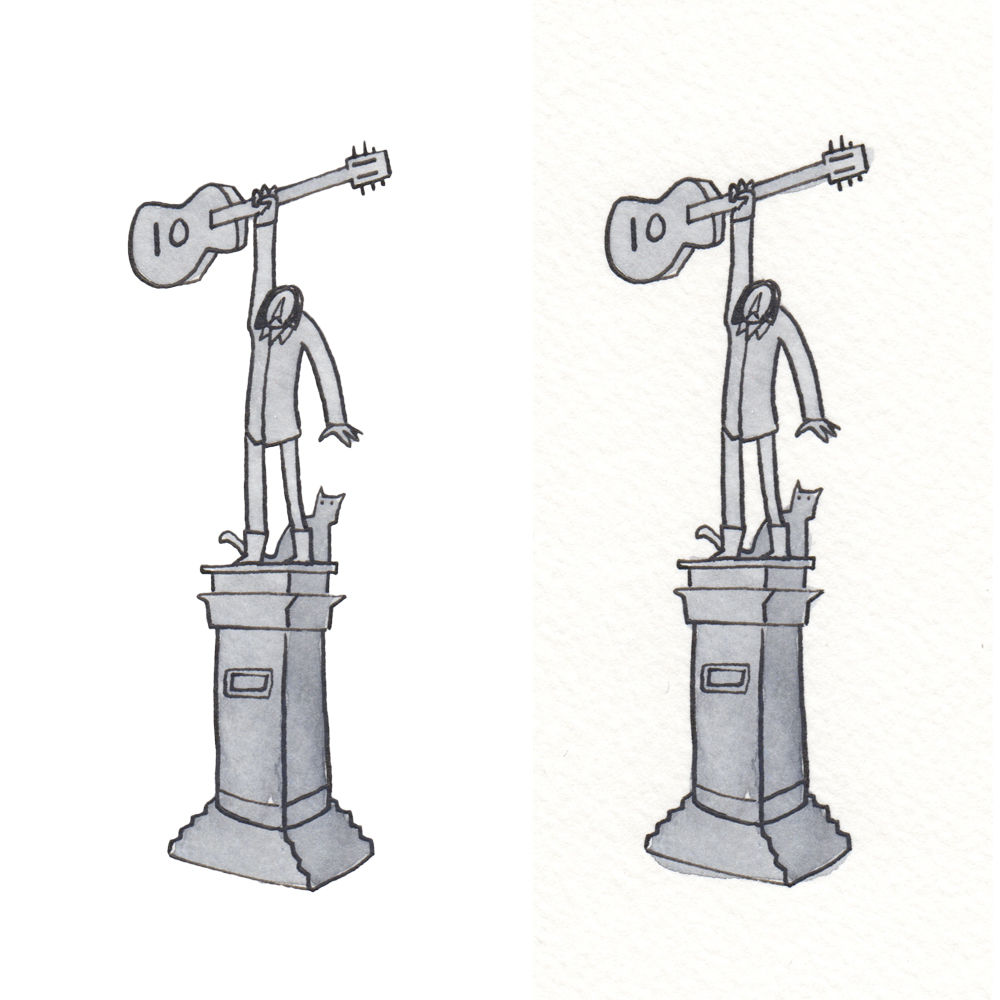 If you can’t see a difference, never mind. That’s what I did for every little thing that you see in this video.

I started to piece together the composition of the main background image in photoshop over the top of the rough version I’d done previously as a guide. Elements that needed animating at this stage were grouped in the Photoshop document. That made it easier to animate later on. Here’s a version I sent Jim while it was in progress.

I imported this psd file into a 1080p After Effects file as a composition and had it moving to the same keyframes as the test version I’d done earlier. Once I was happy that it still worked and that I’d not ruined everything by trying to be too clever with my drawing I started animating the moving parts.

All the animated bits were only two or three frames shifting back and forward, and were relatively easy to do. Here’s some smoke; 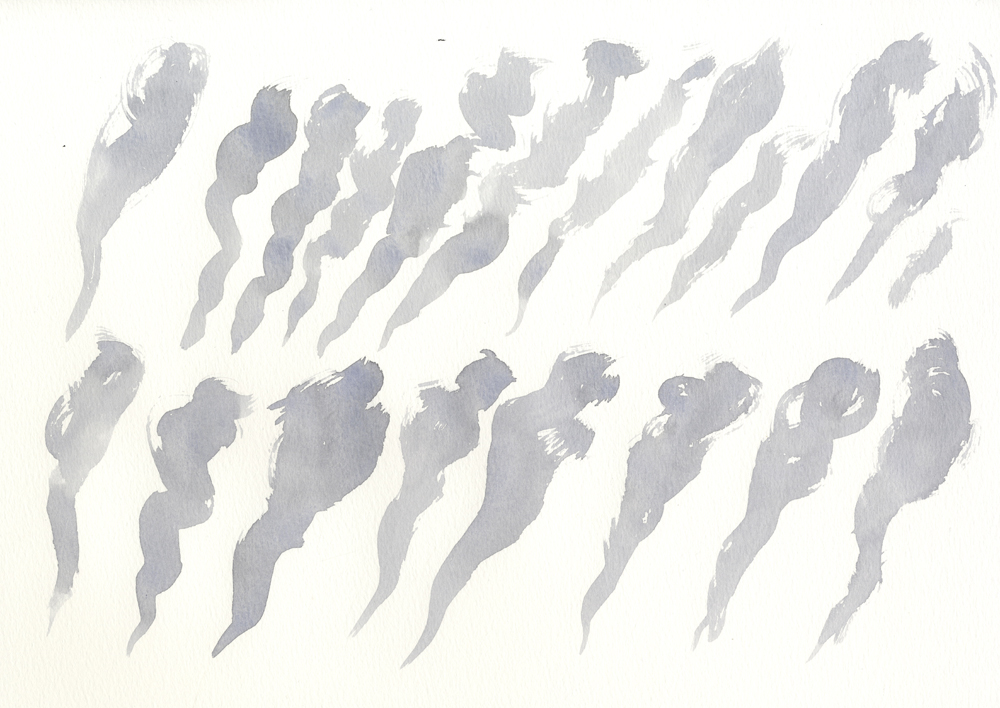 Again, these were cut out and put into groups in Photoshop. Grouping things in photoshop and then importing them as a composition in After Effects means that they come in as a nested composition. It’s incredibly handy to have this feature. It means you can work on isolated elements without the distractions of the computer huffing and puffing over every other layer in the file.

I’d got the back layer animated by the end of the first week and we had what you could consider a functional video. It wasn’t particularly exciting though. For the second week, I focussed on getting a foreground layer in. I followed the exact same process as the background layer because it wasn’t broken and didn’t need fixing and I didn’t have the luxury of time.

I drew multiple versions of each of the characters and scanned them in and isolated them as before. Here’s one of the sheets I drew. 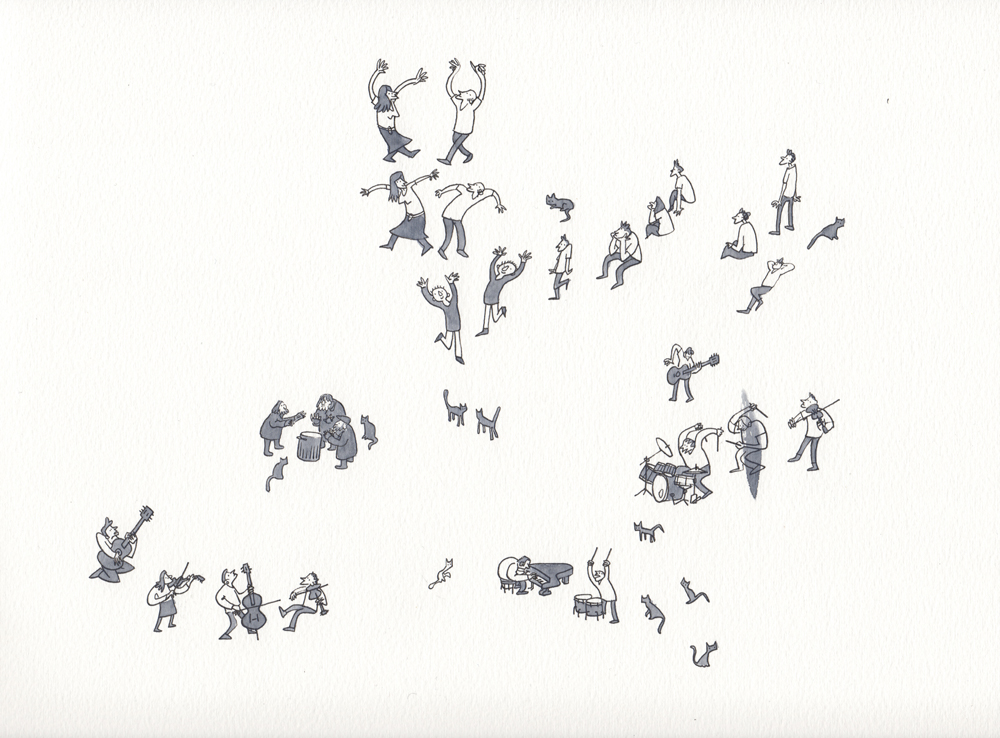 I got them into the rough foreground layer psd file that I’d tested the layout with, and imported it into After Effects, got everyone moving between their frames and then tinkered with the timings to make sure no-one was massively off-beat. I sent a low resolution version to Jim for approval and then built the final rendered versions and uploaded them to Youtube etc. That’s probably when you heard about it. This was a fun project that I had a lot of creative freedom in, but it was also a LOT of hard work. It was mainly done between the hours of 8 and 11pm or 6 and 7am most days. Still, I really loved working with Jim and I’m really pleased with what I put together. 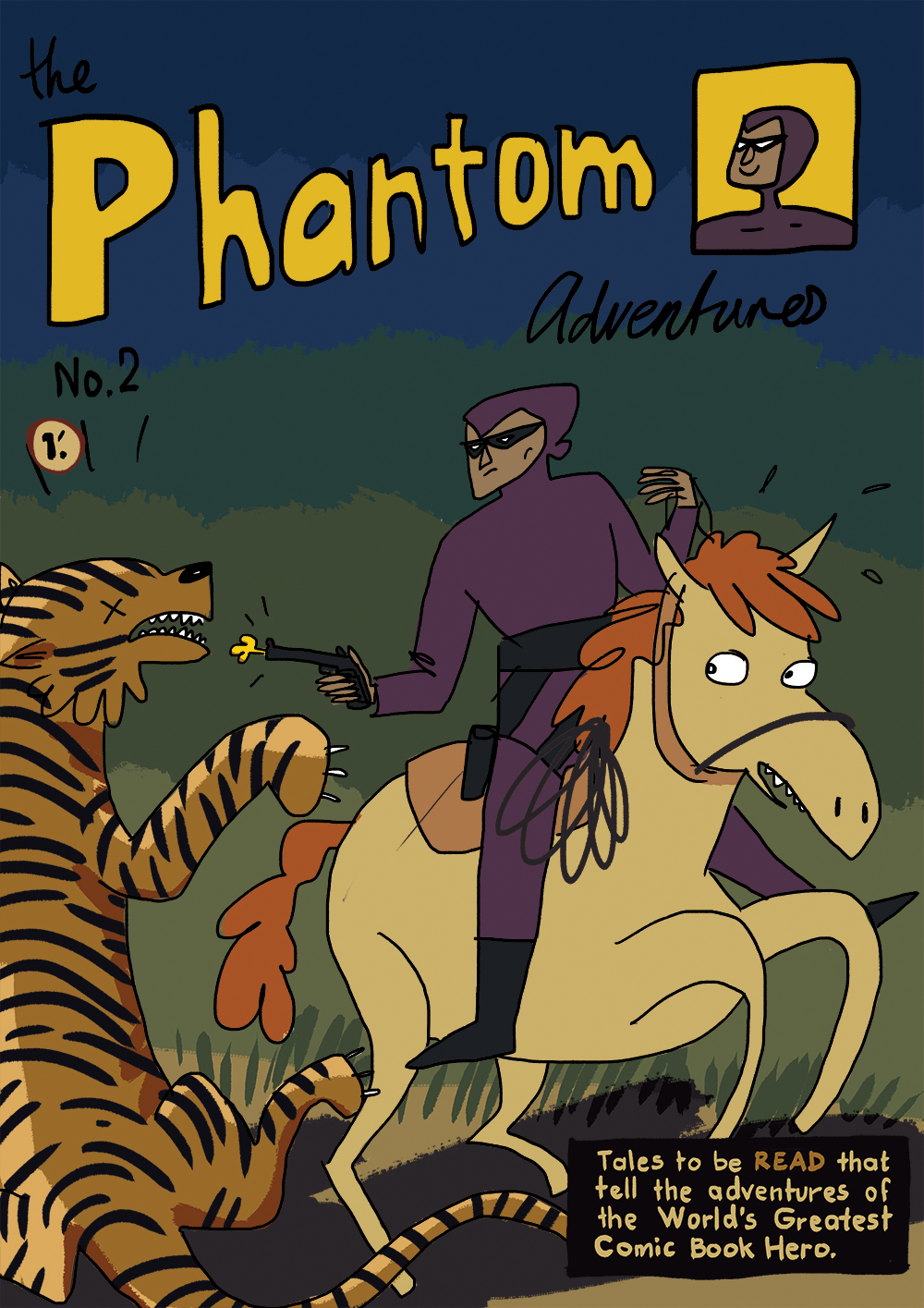 The Ghost Who Shoots Tigers In The Face 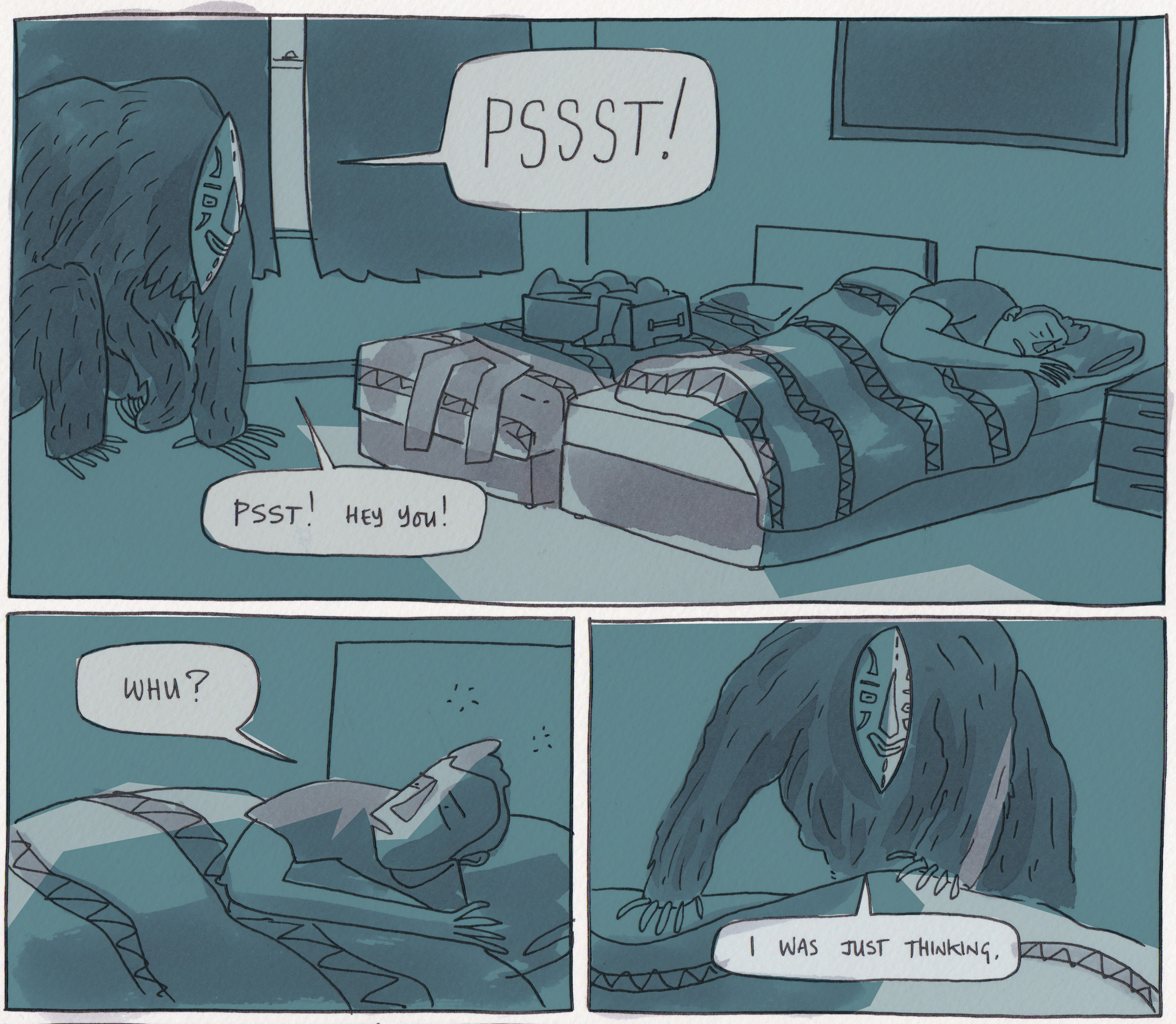 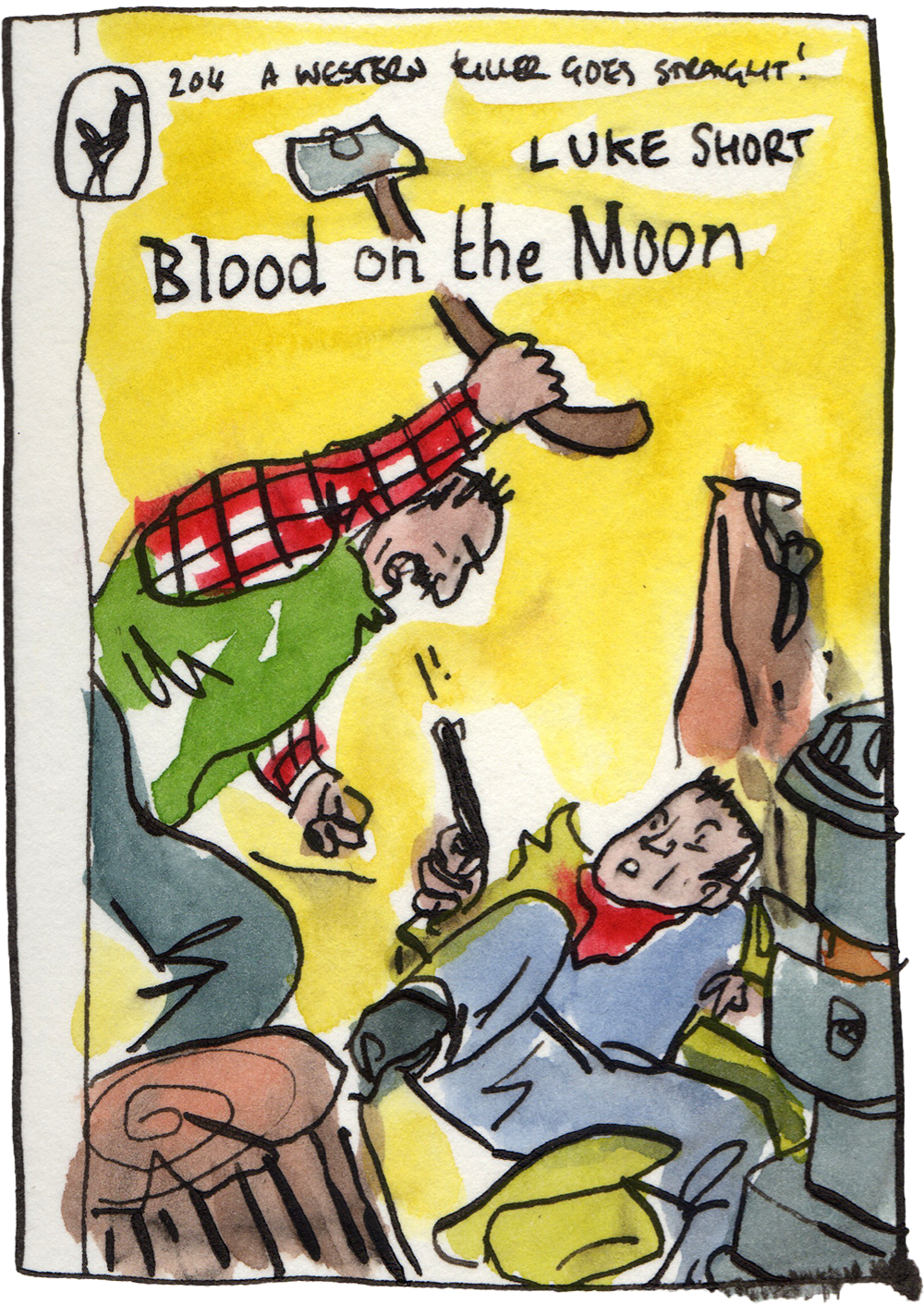 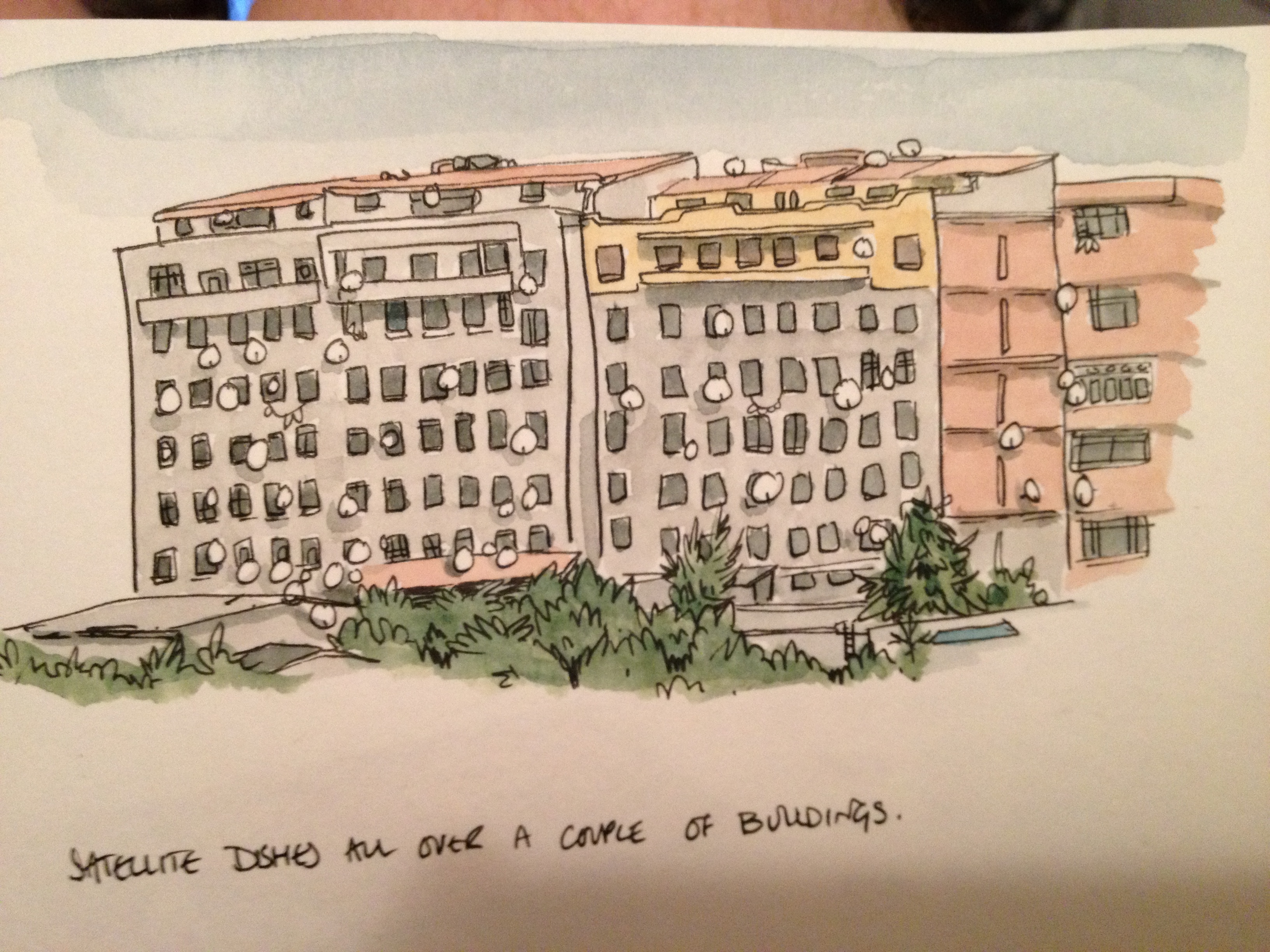